We all feel we march to our own drummer. Yet some of us have drummers in an entirely different band. That's how I felt meeting Mike, on a recent trip to the Eastern Sierras. I love traveling, exploring the world, but Mike's approach is in a different league from my style.

After finishing an amazing dinner of BBQ spareribs at the must-visit Mobil gas station restaurant (yes, really) in the town of Lee Vining, California, I drove up to get a view of Mono Lake from the terrace above the gas station. There sat a site which many of my friends would drool over - a classic '60's VW Van, converted for serious life on the road. 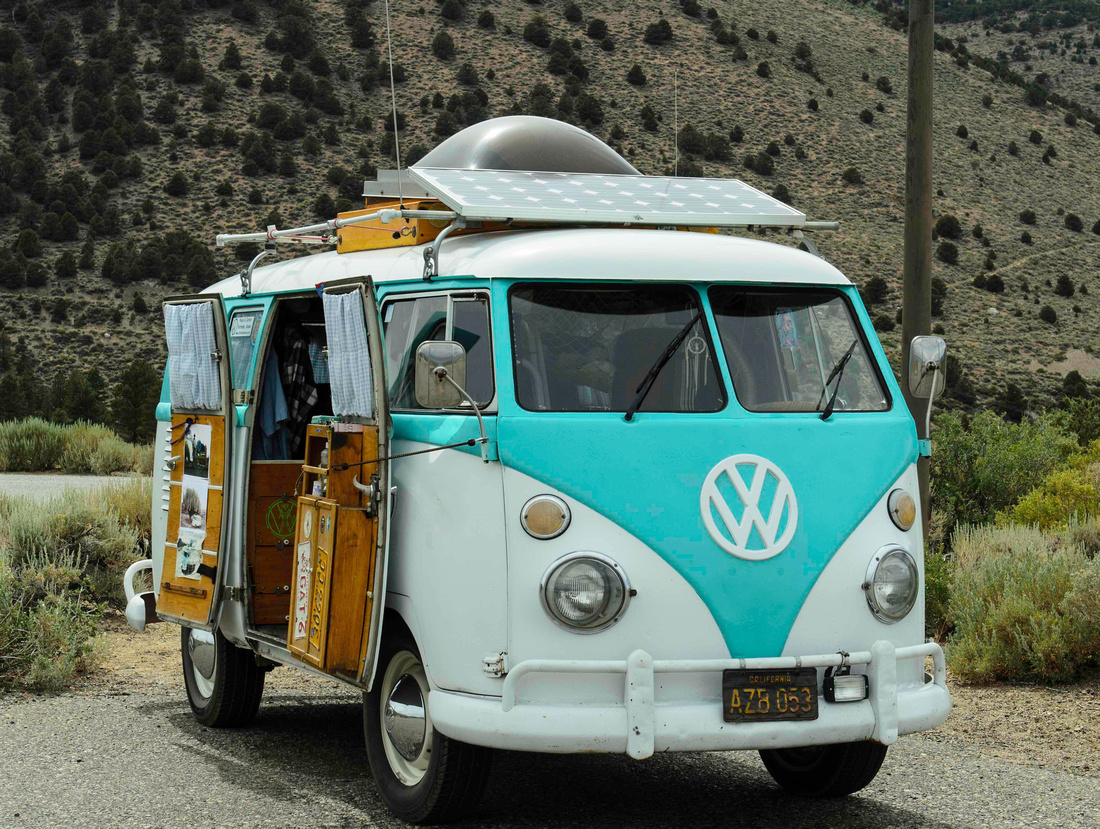 Home on the Road

Pastel Sunset on Mono LakeThe sunset on Mono Lake the night before summer solstice, 2014. The colors were magical, yet subtle. The tufa on the western side of the lake are visible in the foreground.

I was super excited the next day when I returned to find the VW Van once again parked on the bluff overlooking the lake. This time I went up to say hi, and had the pleasure of meeting Mike. I would guess that Mike was in his 60s, and from the sound of things, he's been on the road exploring the world for the bulk of his years.
He is clearly used to casual visitors, as he's got some conversation-starting photos posted on his door to prompt some stories (or just answer some of the questions he undoubtedly gets often). He's traveled as far north as the Arctic Circle (see the top image on the left of his van entrance), as far south as Panama, if I recall correctly. Interestingly, though he's been on the road for so many years he doesn't stray east of the Rockies much at all. (Perhaps this is because there aren't as many National Forests in which one can camp for free.  He was a big fan of USFS lands).
This particular van has been his home on the road for the past 15 or more years, but the stories he shared go back to the 1970's so he's clearly been exploring for some time. This home on the road has as many customized improvements as any fix-it aficionado would have made to their brick and mortar home. Note the bubble-shaped skylight and vent, the solar panel on the front roof (to supplement the power for the fridge, which is also battery and propane powered), and countless comforts designed within reach inside. 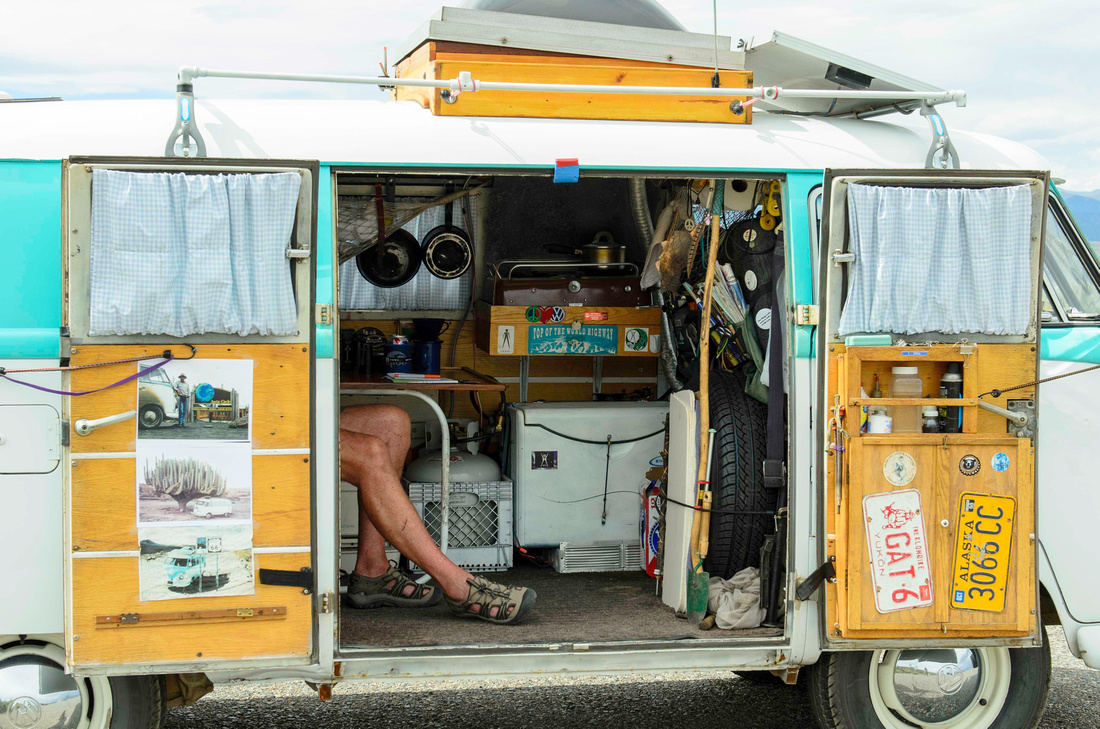 Welcome wagonThis is the view that Mike shows to the world, as he's kicking back in his home on wheels. Photos on the inside of his door show some of his farthest flung destinations.

I was particularly impressed with the curved metal heat deflector over the stove, to prevent fires and direct heat out the top vent (not really visible in this image).
Mike's got various mementos from places and people he's met along the way, like the wooden hiking stick from one of his trips to Alaska you can see standing upright next to the spare tire.  That prompted some stories about places to which we have both been. It sounds like I missed him by a year in Alaska, as he was up there in 1995, a year after me. He has a story about bikers with a private enclave above the Arctic Circle that made me glad he survived to tell the tale. We talked about some international destinations and his upcoming visit to New Mexico.  I shared my photo cards - he picked the one with the path in the woods of Forest Park (here in my hometown of Portland, Oregon) and it's now in a place of honor next to his mirror (just below the bubble vent inside).
Meeting Mike was a fun reminder that we each lead our own path in life, and find what makes us happy (if we're lucky). After a nice visit, Mike had to go - he was walking down to the Mobil station to catch the World Cup game between Nigeria and Bosnia-Herzegovina. With luck, he'll stop by for a visit in Portland next spring.
Keywords: Bryan Aptekar, California, Eastern Sierras, High Desert, Lakes, Lee Vining, Meeting Mike, Mono Lake, Sierras, Summer, Transportation, VW Van, Whoa Nellie Deli, different drummer, road trip, sunset, travel, travel stories
« Previous Post Next Post »

Susie Hubbard(non-registered)
Great story and good telling all built from your willingness and courage to explore the curious and different. Well written. I wonder if he blogs?
Patty(non-registered)
Welcome back to the blogging world, glad to hear from you again! This was a good and worthy post.
No comments posted.
Loading...
Subscribe
RSS
Recent Posts
Sharing the Love - My photos earned a little love People travel for many reasons; or, my roommate's evil plot to turn me into a cat person New photo toys and a new year's wish... Meeting Mike My first exhibit! Remembrance for Nan Skating St. Ignatius (saves lives) Travel to the Past Barn-Spotting A second day of good work
Keywords
Japan Around Portland friends Flight of Friendship birds Around Oregon Portland sunset Featured sunrise
Archive
January February March April May June July August September October November December
© Bryan Aptekar
Powered by ZENFOLIO User Agreement
Cancel
Continue