A second day of good work

I stink.   Truly.  I stink of dead fish and squid and who knows what festering ick lived in the piles of debris in the driveway and drainage ditch in front of the house we worked at today. I pity whoever sits next to me on the plane home tomorrow.  I can only hope it’s one of my fellow Flight Friends who will understand, as I’ve washed my hands a half dozen times, I’ve showered, and still my hands stink of fish.  And I couldn’t care less.

Taking photos of our accomplishment during a rest break. That entire wet spot covering the ground was several feet deep in muck, consisting of everything from dead fish to soaked tatami mats, all stirred up in sea water and silt.

The details of our work project today, while incredibly relevant to those of us who did it, are probably not that exciting for others to hear.   (Though I was on such a high from the experience, I’m sure I seemed like a crazed babbling person sharing my stories with those I sat with when the half full bus from a different work project picked us up at the end of the day.)  More after the jump…

As Amy from Mercy Corps said at our Farewell Dinner this evening, the work we did today at our work site – where we essentially cleaned out one woman’s front yard of muck and debris, allows her to now get on with her reclaiming her life.  That’s a nice gift to give someone, and it was well received.

And that’s how I have to look at it, because it’s just so devastating to think about all that was lost, and all that lies ahead, for all the other homes with debris in their front yards up and down the coast.  There’s so much yet to be done. 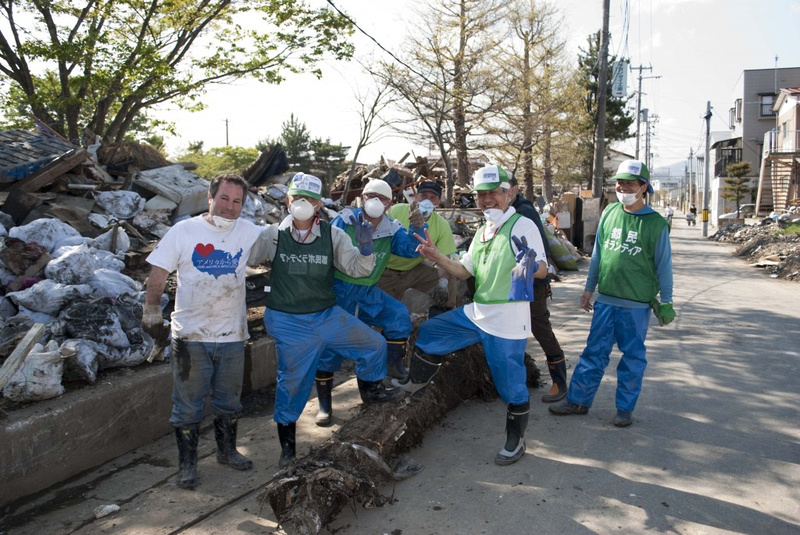 Little victories can often be the happiest. Here we were celebrating our success at hauling a large tree from the ditch in the front yard we were working in. We brought all the debris two blocks down the street, to the local park, which currently serves as the interim debris dump, before larger equipment comes to remove it (I assume).

Progress is made, one day at a time, one group of volunteers at a time.  Our group was graciously accommodated by a variety of local NGOs into the rotation of local Japanese volunteers who have been sharing in the task of supporting the survivors of this tragedy, and helping them start over.

The others in my bus today realized the next step in that process for many as they helped unload all the furniture and stuff from rice cookers to linens needed to fill the small units that will be the temporary homes for families moving out of the shelters.  Still others visited the scenic islands of Matsushima, considered one of the iconic “three views of Japan”, an area suffering greatly from the complete drop-off of tourism since March 11th.  Their presence on the boat tours and at a local temple were apparently a major emotional (not to mention economic) boost for them.   A few others from Pendleton visited those in Minamisoma, their sister-city near the Fukushima plants.

This trip, this journey, has been so many different things to the 90 or so folks who participated, and clearly meaningful to those who we’ve met along the way.   I’m not done figuring out all that it has meant to me.  But I do know I am not bothered by the stink, while I figure it out. 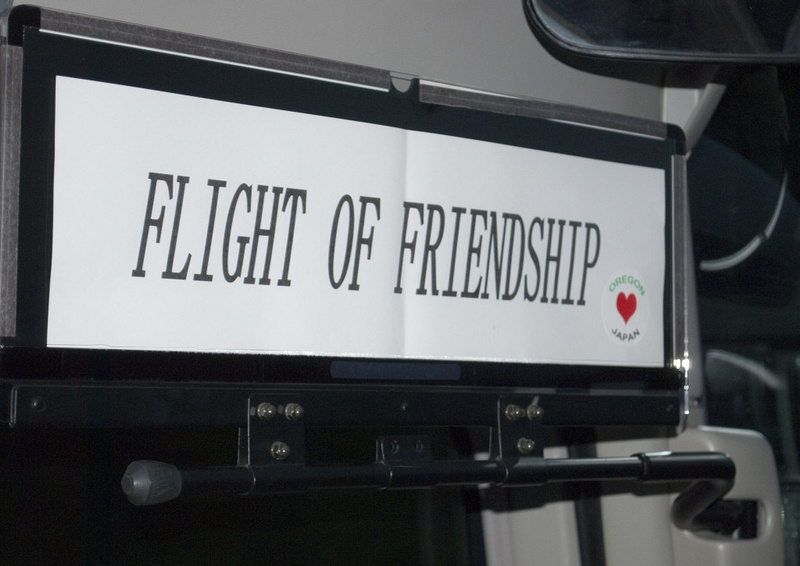 The name of our group, above the door on our bus.