A day of good work

We visited to the town of Ishinomaki today.   After a quick web-search as I drafted this post, I see that it was where one of the two Americans known to have died in the tsunami was found.  She’d been a teacher in several of the school’s in this town, perhaps the one we worked at today.  I’ve no idea.

We drove through the town, which was full of recovery activity, on our way to our work site for the day.  The roads had been cleared (mostly), new power lines were being strung up, a few new homes were under construction.  And yet, debris still littered the town.  Cars piled on top of one another, sat untouched.  Houses you could see clear through the ground floor to the other side, though piled high with debris.  As we drove home at the end of the day, we noticed the sea wall to the  east, blocking the view of the ocean itself.  Strangely, parts of the town seemed to have not been damaged at all. 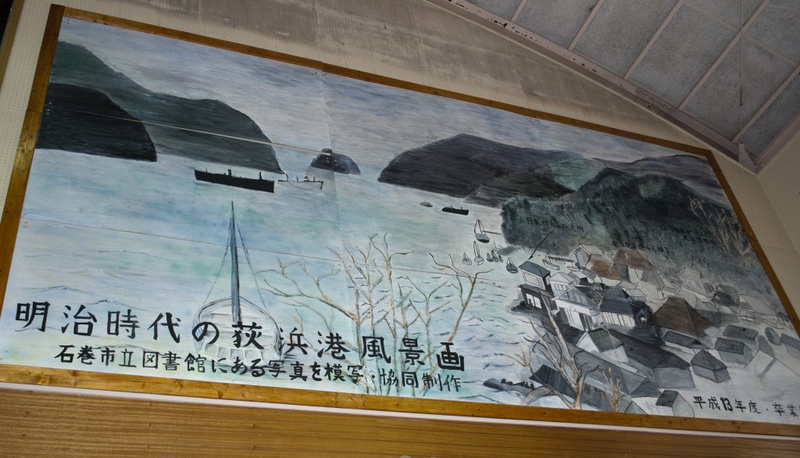 A mural on the gym wall, at the school where we did our clean up project, shows the bay just across the road from the school. We had lunch in the gym.

Paintings by the kids of this school also lined the walls of the gym. I was struck by how every image related to the ocean.

Our work site was an elementary school, a distance out of town, over a set of hills not unlike driving from one Oregon coast town to the next, with views of oyster beds in the bay below.  Fixes to the earthquake damage of the roads was underway as we drove by.   At the bottom of one of the little hills, within easy view of the water, across from a beach littered with more debris, the trailer from a semi-truck, the roof of a home, a jumble of power poles and several boats, we pulled into the clear parking lot of a two story elementary school.

More after the jump…

Our project for the day was to clear the debris behind the school, that littered the creek out back.  This beautiful forest, of what I think were Japanese Cedar trees, and reminded me strongly of my days teaching outdoor school in the redwoods of San Mateo County, California, was the site these students do their outdoor school experience – right out their back door. 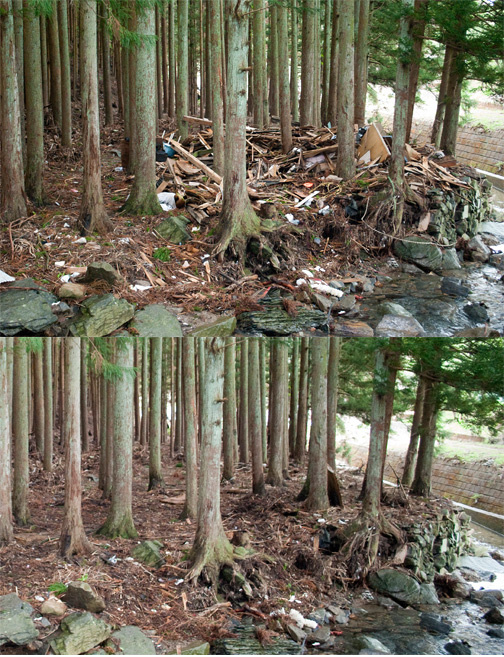 A before (top) and after shot of the pile of debris that was across the creek from the trail down to the road. A volunteer crew of close to 30 people moved this entire pile from one side of the creek to the other, in the afternoon. The debris was passed bucket brigade style across the creek, then hauled by hand or wheel barrow down to a dump pile near the road.

Another group of volunteers, from a Tokyo business that is letting groups of 10 of their staff at a time go north to help out, were already at work when we arrived.  After a short safety briefing, some shuffling of deciding of gear, we all jumped in and started hauling stuff.  It was a football field’s length or so down the dirt road at the side of the creek, to where we brought the debris, and separated it as much as possible into piles. Plastic baskets, wheelbarrows and everyone’s sizable shoulders moved likely a ton of debris down to the main road for collection at some later date.  Up the creek, across the creek, even in the creek, folks pulled out everything from oil drums to sheet metal to lunch boxes.  Personal items were set aside for others to look through later, but there were precious few of those. 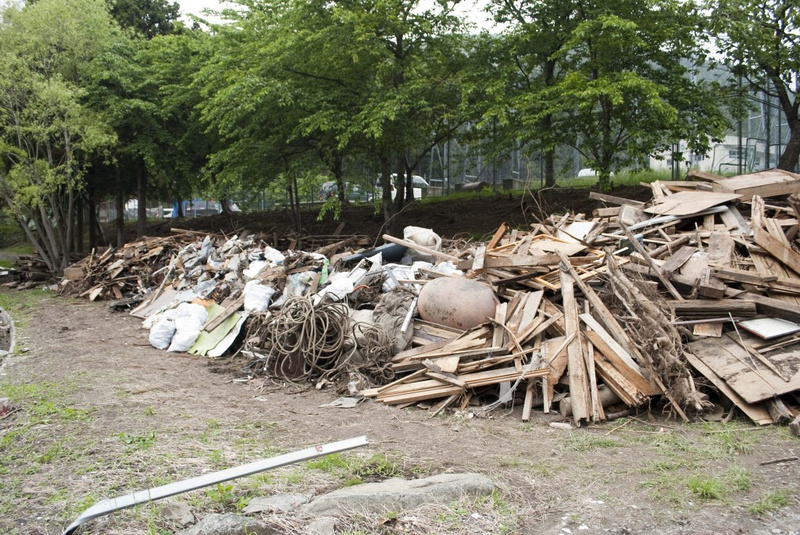 Separated piles of debris at the edge of the main road, ready for pick up. We certainly didn't move all of this during our work day - but we added a good bit to the pile with our efforts. Across the street from this pile ready for removal was several hundred yards to the water, with piles of debris as yet untouched.

One of the things that struck me during the day – probably a sign of my naivete, or simply not having thought about how it would work until being here to do it – was that so much of the debris left by the tsunami up and down the coast and miles inland has to be collected by hand.  I had a vision of bulldozers just shoving everything into dump trucks and hauling it away.  But that’s not realistic.  Certainly in early days after the tsunami, they’d have wanted to have looked for survivors, so no bulldozing.  At some point, I would guess the roads that have been cleared were bulldozed, but beyond that, in homes, schools, the forests, the only way to get things out of there is by hand.

I have to give big props to those organizing our trip – Azumano Travel and the Dozono family, as things don’t get much harder than this.  We’re a diverse and interesting bunch, those of us on this trip, and while we had the pleasure of breaking into small groups for the first time, giving us the chance to get to know one another better – it’s no easy task keeping things running smoothly with uncertain and changing conditions, responding to different people’s needs and challenges, all while trying to ensure we remain as sensitive to the purpose of our journey and the delicacy with which we should treat those we encounter on our experience.  (I think it was the Ambassador who said that to the Japanese the entire disaster zone is hallowed ground, like where the World Trade Centers in NYC stood is to Americans.  Part of our trip we were tourists, but not here. )  Thanks to those leading us, at least for my small group, things went remarkably well today.

I’m sure there’s more to share, but it’s late, and we start again early tomorrow.