I suppose it’s one of those things you learn in kindergarten – that life’s full of choices.  But choices are funny things, at least for me.  Some take up major amounts of my thoughts, even simple choices.  I can angst over whether to buy a can of smoked oysters or not, for much longer than is reasonable to admit.  (It’s best not to go shopping with me, if you’re in a hurry.)  And others, are rather simple.  Like my choice to focus my time and money on my vacation ethic, rather than fixing up things in the house or the like.

I’ve made what I think is a wise choice to not name this post Lens Envy, though this photo gives a sense of what I’m talking about. 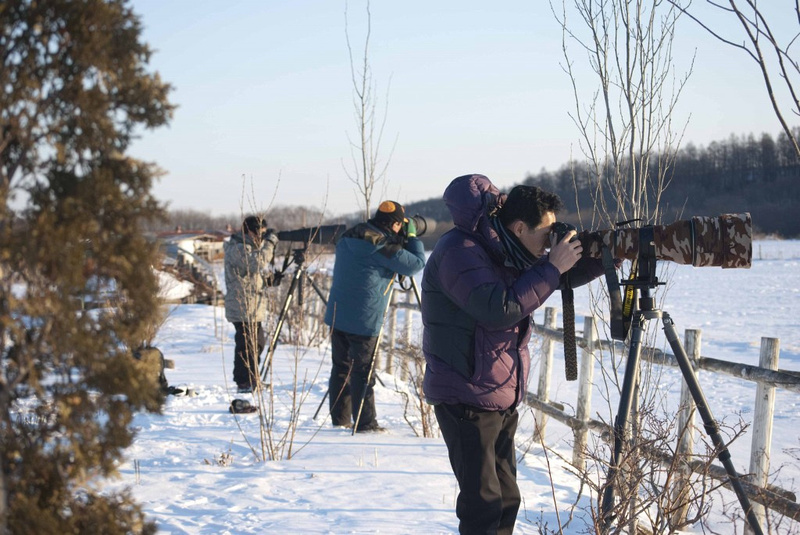 As I was thinking about this – my next blog post from what has been a magical and meaningful trip for me this past few weeks – that title popped into my head.  Consider the scene – late afternoon out the back of this lovely cafe at Tsurumidai, a part of Kushiro Shitsugen National Park, a vast wetland famous for the amazing Red Crowned Cranes. 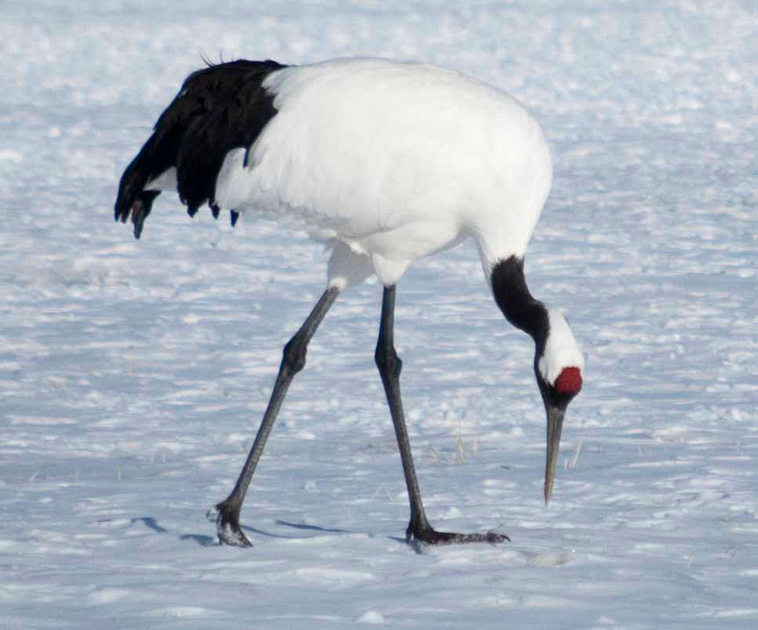 The Tancho, or Japanese Red-Crowned Crane. A quite lovely bird, and loud too. (At least during mating season, which is winter.)

Continued after the jump…

The day had been so bright I needed sunglasses – truly.  I asked if they had some at the cafe, but no luck.  The sun reflecting off the snow was so intense my eyes hurt.  I spent several hours with my hands up to my eyes making owl eyes or binoculars with my fists, to limit the sun.  It worked, even if I did look a bit like a goofball.  I can live with that.

Anyhow, back to the sunset story and choices.  The field behind this cafe is flanked by a river, so the cranes fly back and forth from there to the feeding ground across the street from the cafe. 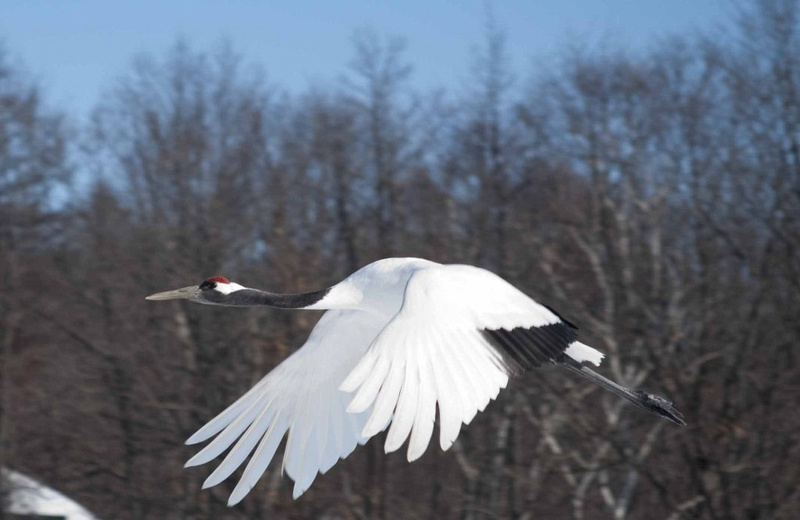 Crane cruising through. This one's headed towards the river. They're so graceful to watch fly.

The cranes were thought extinct due to hunting, when a small flock of 20 or so were discovered in the early 1900s.  They’ve been fed by the locals who share their grain with the birds, even in the slim years, to help bring this population back.  There are around 1500 or so now.  Choices. 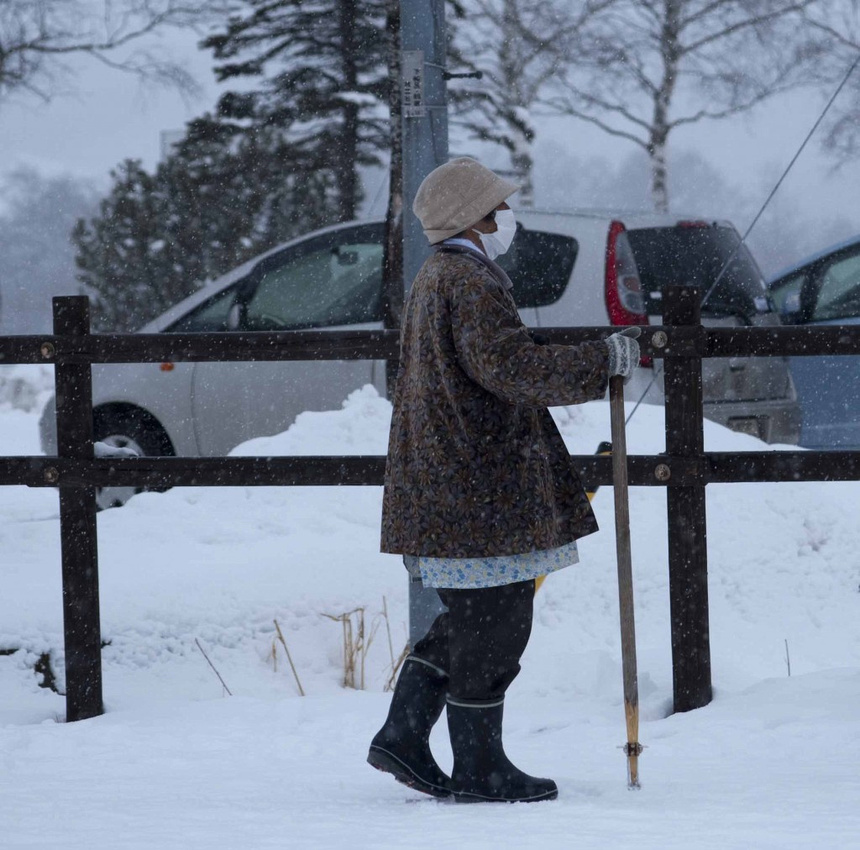 This little old lady wouldn't put up with any cr*p. Feisty kids throwing snowballs - a few words from her and it was over. I'm not sure if she's a ranger or what, but she ruled the roost, and kept busloads of us tourists in line.

The view from the back of this cafe is remarkable.  Not only do they have a charming garden, but from the garden there are views of Mt. Oakan-dake, as well as the smaller Mt. Meakan-dake.  With the cranes flying in small groups back and forth, I figured the opportunity would be great for a cool shot of the cranes, the mountains, the sunset… 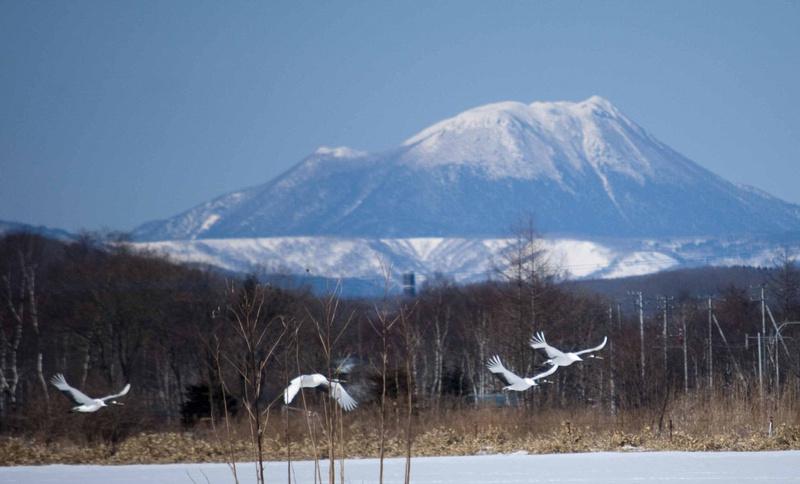 Cranes flying across the fields in front of Mt. Oakan-dake. Pretty special.

But of course I was not alone in thinking this.  Enter big lens guys…  Instant lens envy on my part.  At least at first.

I spent much of the next day thinking about this.   No question, with a lens as fancy as those, I could get a cool close up of a crane’s nostril.  Or who knows what.  Those lenses are so big they mount to the tripod, and the camera just hangs on by the threads.  My camera, by comparison, mounts to the tripod, and the lens hangs on by its threads.  (My tripod probably wouldn’t be up to the weight of those lenses.)

But as I stood there looking at their gigando lenses, all I could think was – how do they carry that around Japan.  I’m carrying all my gear.  No rented car.  No sherpa.  Just me.   Choices…

I’d left this last week of my trip a bit open, so I could see what drew me to visit, and what advice I got from folks along the way.  After my sunny day with the cranes, I trekked to the north side of the island, to Abashiri, to see the drift ice. 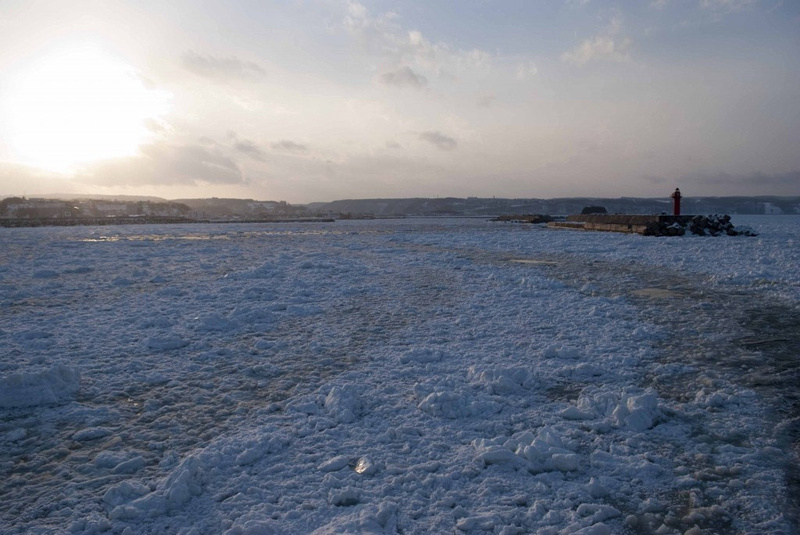 A view from the Aurora icebreaker boat. Check out the ice-wake.

Apparently as the Amur River, which runs between China and Russia and drains some huge part of Asia, spills into the ocean, the mix of fresh and salt water causes funny things to happen.  Among them, drift ice.  This stuff gets shoved south, into the waiting arm of northern Hokkaido, which looks a bit like a crab claw, pincers open.  Abashiri is the lucky recipient of major drift ice each winter. It was pretty amazing.  I took a long walk along the shore of the Sea of Okhotsk (or the sea wall, really) to check out the drift ice. 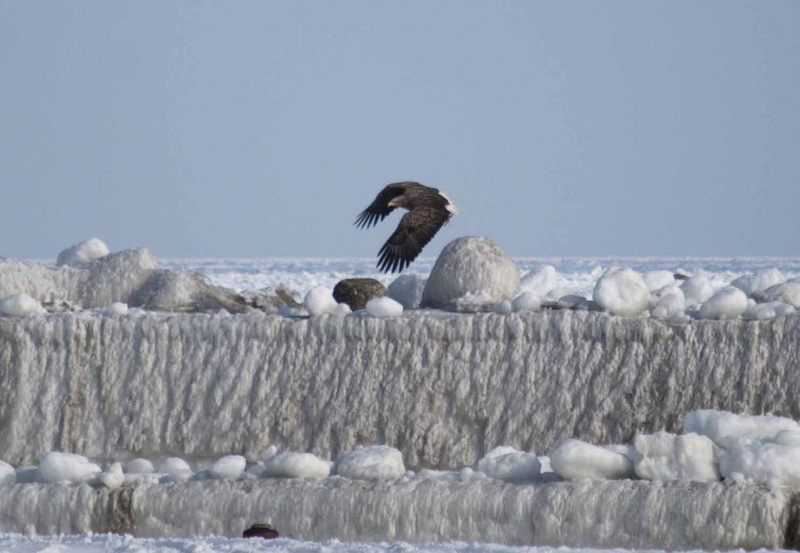 An eagle flying off its perch of the frozen-over seawall, with Sea of Okhotsk in the background.

It’s clearly a big deal here.  Ships are pulled ashore for the winter… 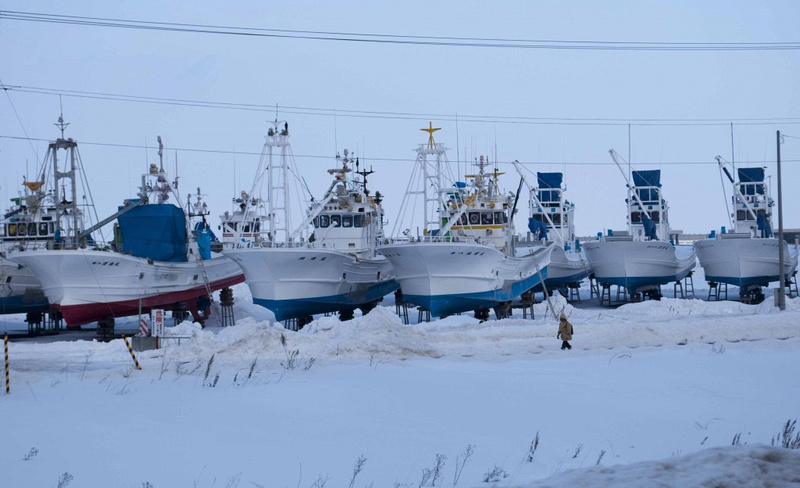 A bunch of what I assume are fishing boats, on shore for the winter. The woman walking in front of them was collecting seaweed a different place along the shore. We had a rather amusing drawing/gesture/conversation as I tried to figure how she'd made it down there. She was scared I didn't realize the snow was deep, and that just past the sand I was gathering for a friend the ice was not solid. I appreciated her caution. It worked out well for all. I really need to learn more Japanese.

… and much of the tourism focus is centered on the ice.   (The prison did not draw me, though it’s apparently as famous here as Alcatraz is in the US.) 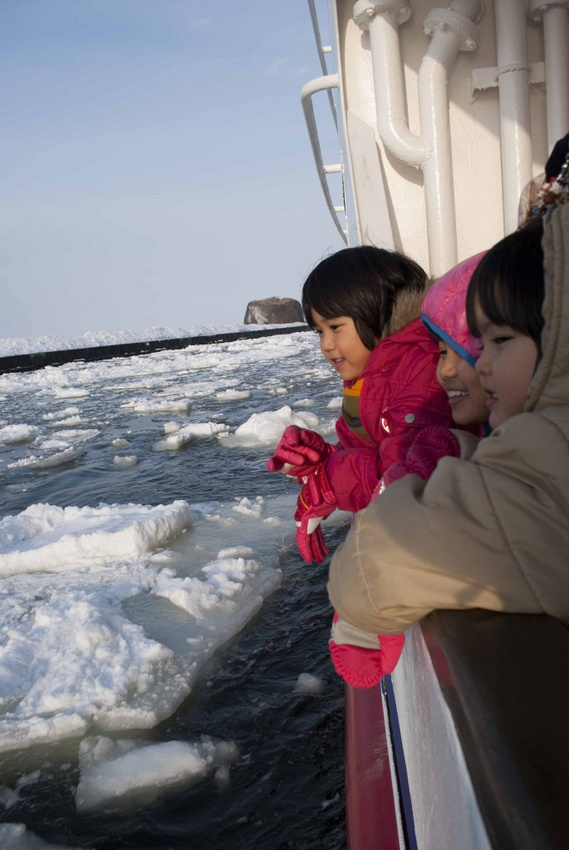 Icebreaker sightseeing trips. Fun for the whole family. I loved it.

Still, as cool as the ice was (no pun intended) I was drawn to return to see the cranes some more.   So, another lovely train ride south brought me back to Kushiro, where I awoke to a completely different scene.  Snow.  There’s been snow here in Hokkaido pretty much everywhere I’ve been.  But this was the first time it was actually snowing.  Nice.  Very nice.  It made for a completely different experience at the same place. 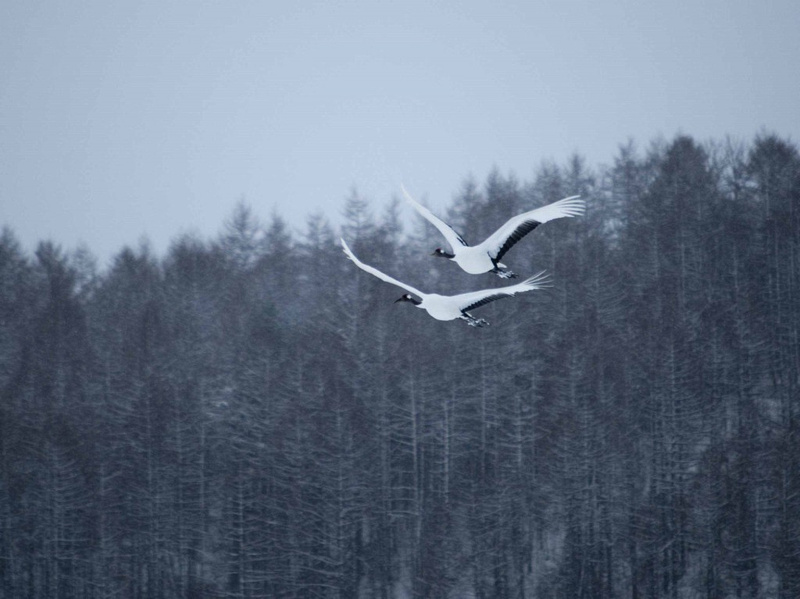 Cranes flying in front of a forest dusted with fresh snow.

I was glad I made the choice to return to Tsurumidai for a second day with the cranes.  The big smile I got from the cafe owner when I walked back in was a nice treat too.

And as I mulled over how to share my photos of the cranes, I veered away from the tongue in cheek title I’d had in mind, to this more serious one, for a few reasons.  On one level, it really was about the trade-offs that choices force us to make – as the  mega-lens would have for me.  And the choices made by the Japanese people to help bring back a species from the brink of extinction.

But it’s also about the luxury so many of us have to be able to make choices in our lives, for ourselves, our families, our future.  For my time here in Japan has been at the same time as the historic upheaval in the Middle East, with Mubarak stepping down from power in Egypt after 30 years, and others in the region acting on their desires for choices in their lives.  It’s hard not to be moved by all that is happening there, and be thankful at the same time.

Lastly, for much of this trip I’ve been reading an amazing coming-of age story set in a fictitious invasion of Australia, the Tomorrow series, by John Marsden.  (Thanks Sarah for putting me onto this series!)  Nothing I have ever read has so personalized  war for me, and its impact on children, on everyone.  And as engaging as it’s been, it’s a pretty intense read.  So this too has had me in a more thoughtful mood.

So – I guess to wrap things up, I’m thankful for the lens (and the life) I’ve got.  I’m happy with my life’s choices.  I’m thankful that they allow me to take a look at different corners of the globe, and share my experiences with others. 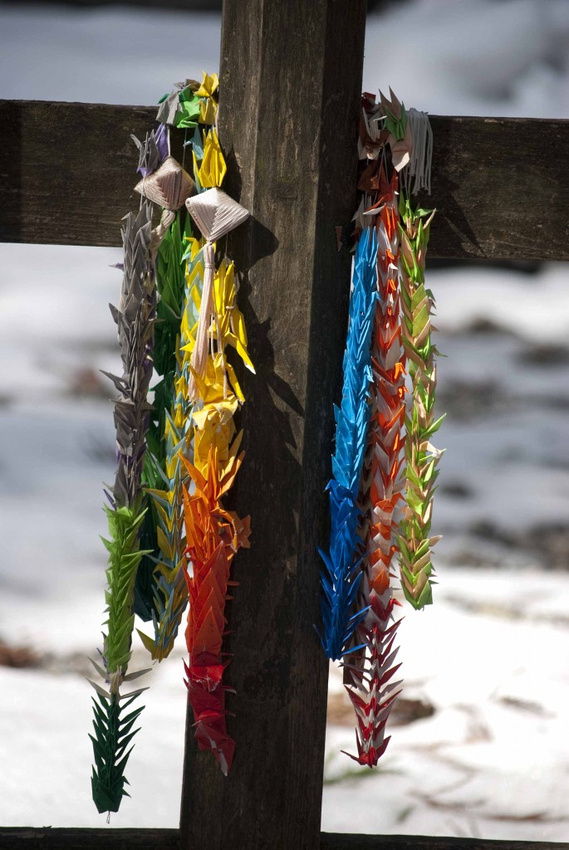 Strings of origami paper cranes, hung as wishes on a fence post in the cemetery in Koyasan. Consider this my origami offering of a wish that everyone has the freedom to make meaningful choices in their own lives.