I met my hero today.   Several of them, in fact.  I was brought to tears several times by the stories they shared of their experiences helping tsunami and quake survivors in the villages of NE Japan.   Each of the four speakers at our Embassy briefing today has played a part in the collective response to the triple tragedy of March 11th.   The Ambassador himself, the gentleman who heads US-AID (Agency for International Development) in Japan, the Director of the Tokyo American Center, who volunteered through All Hands, and the Naval Commander who became my new hero for the day.

Sho Dozono thanking my hero, Commander Freeman after his briefing.

I didn’t have any expectations about the briefing before we went to it this morning.  (More after the jump…)

I may be one of the only folks in our group of about 80 folks whose only tie to Japan is a few really fun vacations.   So many others seem to have spent time living here, growing up here, hosting Japanese exchange students, doing business in Japan, or with family ties here.  All of which I say because I think they understood more clearly than I how meaningful this group of Americans visiting Japan (the first organized tourist group to come to Japan since March 11th) really means to the  Japanese.

The reporting on international news has scared folks off. (Apparently it’s scared off many expats who lived here as well, as one foreigner shares.) Hence, one of the big aims of this trip is to highlight that Japan is not only safe to visit, but desperate for it. Our local tour guide through the city shared that she’d had 70 cancellations since March 11th – and our tour was her first since then.  And Tokyo is several hundred kilometers from the nuclear reactors that are in such trouble.

But the biggest reason – at least for me personally – for this trip was to provide direct personal help in some way to those in need.  Tricky stuff that, as we’re only here for a few days, many of us don’t speak Japanese, and the needs are complicated, unique to each village, and evolving.  Still, those organizing this trip have made connections with several NGOs and we’ll be helping out as we can for a few days in four or five different locations.

The stories each of the four speakers shared set the stage for our trip to these sites.   From the big picture to the specific needs of individuals they encountered they told of the immensity of the challenges and accomplishments of the past few months.

So  – why was the Commander a hero to me? It wasn’t the stories of the massive mobilization of military resources he helped coordinate in collaboration with the Japanese Self Defense Force, though their efforts have become the stuff of legends locally.

I’m going to get these stories wrong – as I wasn’t taking notes (and how could I when I teared up so often), but it seems he personally took on the needs of several villages that he’s been returning to frequently, and is figuring out ways to fulfill those needs.  With the help of his family and his connections, he’s helped mobilize food collection and shipments of canned vegetables and fruit, to supplement where fresh produce can’t stay fresh between shipments.  He’s helped collect school supplies for schools in need, from academic materials to simple clocks for the classrooms – all of which were gone.   He’s recently tracked down and will deliver brooms used in sweeping the ashes of the dead following cremation, an item in short supply.

I’ve heard it before, but it became so tangible today – that one person can make a difference.  One person who takes action, when needed.   So friends, prepare yourselves to help when I return.  I’m hoping to learn what’s on people’s lists of needs, and planning to help get things delivered.

The other hard part about today, that set the stage for the visit, was the personal stories of the survivors.   We heard several, as shared to our speakers by individuals they encountered.     One shared a story of one of four surviving teachers from a local elementary school who recently committed suicide.  He’d felt responsible for the loss of 10 of his colleagues and I’d swear he said hundreds of kids, 80% of the students in their school – all swept away by the tsunami, when they couldn’t get to high ground quick enough.   It’s just hard to comprehend.

Through their sharing today, they pointed out that above all other things, the biggest help we can provide won’t be the actual mucking out buildings or moving folks into their new homes, but just caring, listening, being supportive of the people we encounter.  On some level, I knew that before coming here, but it’s a much starker reality now.

So the stage is set.  We head to Sendai tomorrow. 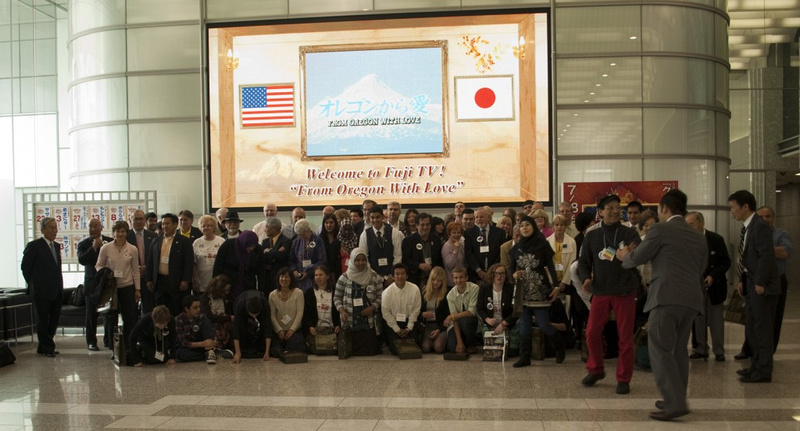 This is our group, in the lobby of the Fuji TV station, which has strong ties to Oregon and the Dozono family, dating back to a TV show about Oregon produced 20 some years ago. They hosted us for an incredibly gracious lunch, and some heartfelt appreciation for us coming on this trip.